As you know, we’re moving to New Zealand on July 3.

Most normal people would spend their final few weeks preparing, packing and completing all the other important items on the ongoing “to-do” list before leaving the country.

That would have been smart, but instead we decided to lead a high school trip to the country of Kosovo. We are currently staying in Suhareke, Kosovo, working with a really cool organization called the Kosovo Project that helps widows, orphans, and students.

Kosovo is an incredible country and is quite beautiful, but the Kosovar have had a very hard history. From 1998-1999 Serbia tried to kill as many people in Kosovo as possible. People were murdered, families and villages were burned, and cities were leveled. Fortunately, the USA and NATO forces came in and stopped the Serbs. The Kosovar were set free, and in 2008 they became their own country.

This is our second year here and we’re having a great time. We’ll be leading a summer camp here with 130 local students and 30 American student leaders. We’ll be playing sports, visiting ancient archaeology sites, hiking, learning about each other’s cultures, and teaching English.

Over the next couple weeks, while we’re in Kosovo, we’ll be posting a couple of updates here about New Zealand. Later this week we’ll explain how we made the decision to move to New Zealand. We’ll also be filling out the “Our Story” section of the site and be sharing what we’ll be doing once we get there.

Our life feels like a whirlwind right now; but, it’s a fun whirlwind! 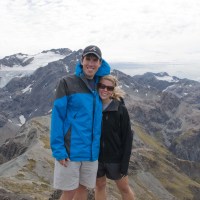